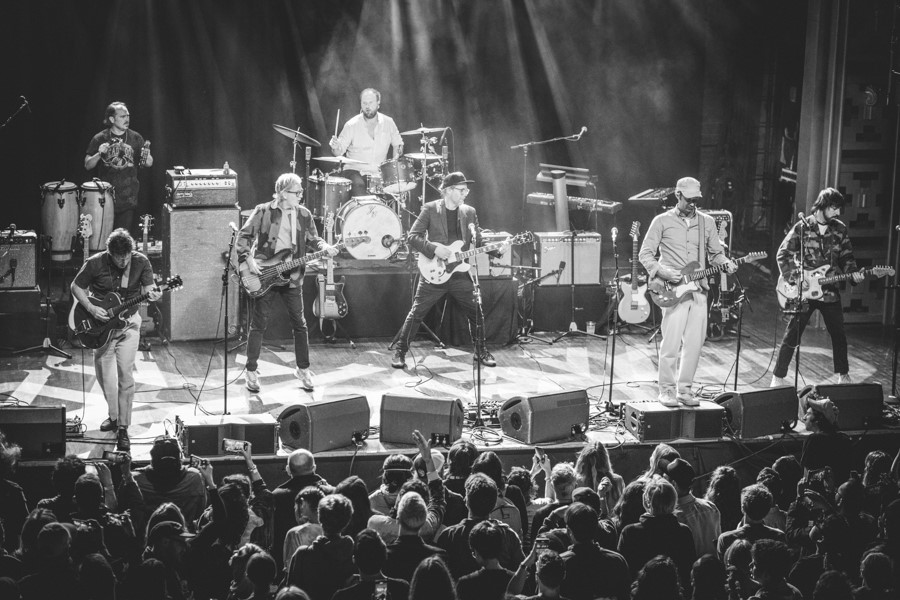 To gaze upon the still-empty stage before a Broken Social Scene show has begun is to view an invitation to chaos. I counted 10 guitars and basses and at least seven microphones on Sunday night at Webster Hall. If you had wandered off the street never having heard of BSS before, you might be wondering just what you’d gotten yourself into before the first note had been played, but the sold-out Webster audience giddily awaiting the final show of the band’s tour celebrating 20 years since the release of their seminal You Forgot It in People album, knew exactly what they had in store and could not wait. Broken Social Scene have always been a strength-in-numbers affair, more collective than band, no set lineup or classic formulation, but when they finally did take the stage, doing their psych-up huddle, the crowd got raucous at the sight of the familiar faces of Kevin Drew, Brendan Canning, Andrew Whiteman, Charles Spearin and more. Drew announced, “Let’s let it all go tonight” and they launched into “KC Accidental,” a surge of indie-rock electricity jolting the room, the unique BSS energy building, Drew crooning to the crowd, Whiteman offering his first guitar solo of the night, everything building to a powerful horns-heavy coda.

The first 40 minutes of the set was exclusively from YFIiP, the musicians rotating through instruments (like Spearin from trumpet to bass to guitar and back again) in some complicated choreography. “Stars and Sons,” featuring four guitars behind a wavy bass riff, Amy Millan (of Stars) taking lead vocal duties on “Almost Crimes,” which literally had the club moving beneath my feet, and then Whiteman taking down things with “Looks Just Like the Sun,” Broken Social Scene reminding us that they can do small and pretty just as easily as they can do big and bigger. In the wave/particle duality of rock bands, BSS were always more wave, rippling positive energy through a crowd that diffracted, refracted and reflected it back again. “We’re a hope-anthem band!” Drew declared as they plucked favorites from other parts of their repertoire, “7/4 (Shoreline)” requiring a wide lens to take in all the musicians onstage weaving together in 7/4 time. Then it was back to the You Forgot It in People material, including “Shampoo Suicide,” a highlight with its unfolding complications and free-form vocals around the repeated lyric “All the lights we were.” Drew began “Lover’s Spit” solo, the audience loudly singing along, the guitar triumvirate of Canning, Whiteman and Spearin coming back on, the whole band eventually kicking in, small to big, then back to small again.

After a let-it-all-out “It’s All Gonna Break” that had a little bit of everything, the collective shape-shifting in real time, doubling up and doubling back with the energy of a band on its first tour, Drew announced they had one last song from the celebrated album to play. He then introduced a special guest and I’m not sure anyone in the room was expecting Tracey Ullman to join them to sing “Anthems for a Seventeen Year-Old Girl,” but that wasn’t even the biggest or strangest surprise of the night: Ullman joined Millan and Jill Harrison (and really the whole room) in singing the longtime crowd-favorite chorus of “Park that car, drop that phone, sleep on the floor, dream about me.” Then Ullman coaxed out from offstage none other than Meryl Streep (!?) to join them in singing and dancing along, as if the assembled group wasn’t big enough already. Chaos indeed, invitation accepted. —A. Stein | @Neddyo