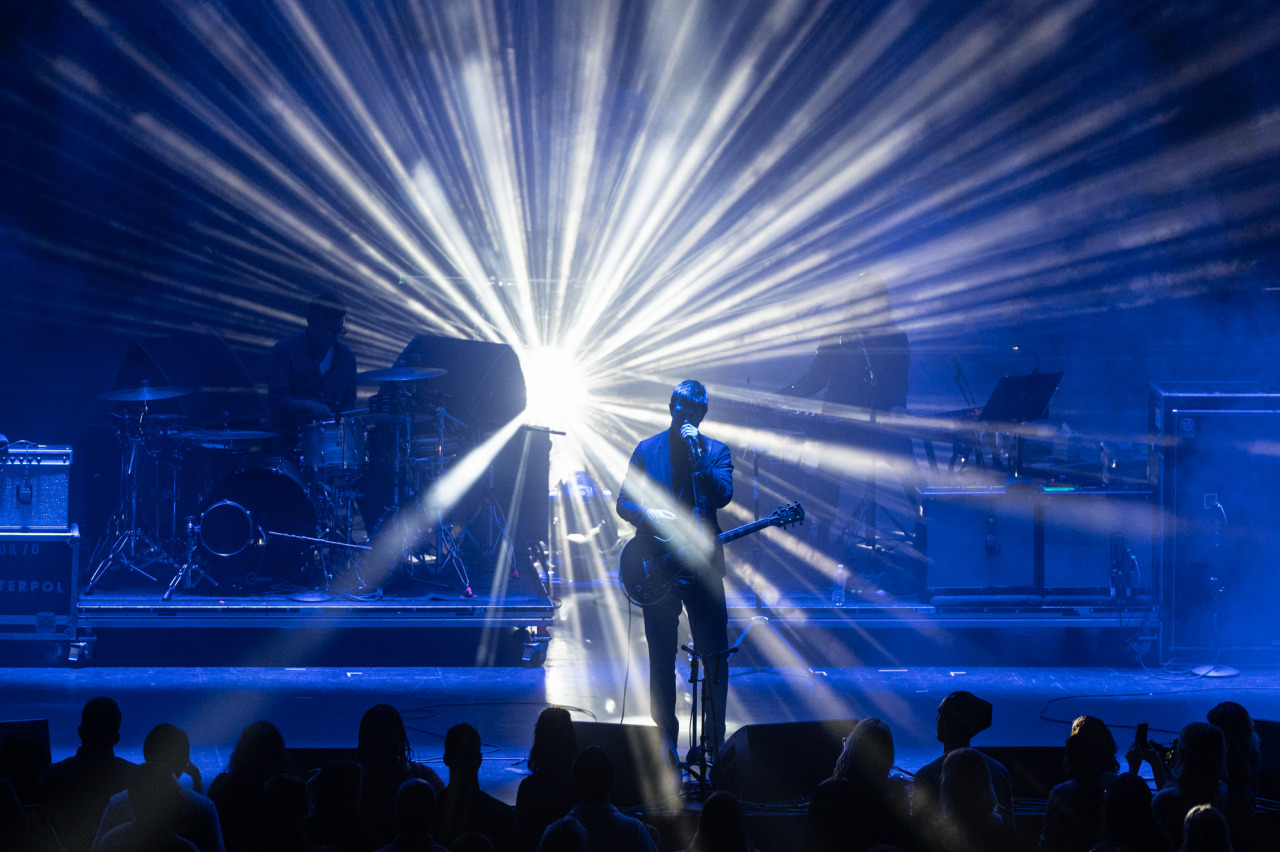 Interpol Embrace Their Past and Future at Kings Theatre

Interpol in 2022—that’s a whole lot of nostalgia for a certain era of New York City rock music, deftly captured in the Lizzy Goodman book Meet Me in the Bathroom, among other sources, and now marking 20 years since the dark-and-dour grandeur of the band’s 2002 debut, Turn On the Bright Lights, first hit us right in the amygdala. Label shenanigans, lineup changes, hiatuses, detours, fadeaways, returns-to-form and who knows what other water droplets under the bridge later, Interpol still command a stage with vicious nerve—looking to, nodding at or slicing toward every previous stop on their two-decade-thus-far journey during a fast-moving 90-minute show.

That said, nostalgia can also wait at the door. New songs from Interpol’s forthcoming seventh album, The Other Side of Make-Believe, suggest they’re not ready to let their best days be behind them. In release notes ahead of Make-Believe, they’ve described the new album’s songwriting as part of continuing the “search for tender, resonant emotions”—of course, a very Interpol way of looking at the world. They played half a dozen new tunes in the thick of two 19-song shows at Kings Theatre Saturday and Sunday night, all of them earning their place alongside the classic material. On Sunday, there was “Toni,” which begins spiderweb light and descends, via an increasingly insistent drumbeat, into echoey-spooky gloom, riding arpeggiated piano. There was “Something Changed,” again with stentorian keyboards, not deciding if it’s going to plod or boogie, and singer Paul Banks intoning, “I waited through shame for this.” There was “Fables,” a steady, anguished throb. And there was the mesmerizing “Gran Hotel,” potent and big sounding like its title implies. (Two other Make-Believe tunes had swapped in on Saturday night.)

Around them came the sweeping gestures, gems and audience-stoking sing-alongs of the Interpol back catalog, many nonchalantly introduced by Banks—“Evil,” “Narc,” “Pioneer to the Falls,” “The Rover”—as if they’d never been played before. The OG material from Bright Lights is still what burns hottest and smolders longest: “Obstacle 1” still sounds like a panoramic nightmare. “PDA” still has a playful darkness to it. “NYC”—a rarity this tour, but inevitable here—still slow builds to a droning climax with lots of cacophony, like subway brakes screeching down a tunnel.

Banks, guitarist Daniel Kessler and drummer Sam Fogarino locked in tight and steady as they’ve been doing now for decades. Keyboardist/singer Brandon Curtis and bassist Brad Truax (touring members of Interpol since roughly 2010) filled in the spaces and made them even fuller and gnarlier. As austere as Interpol can sound, this was the full-on rock show, with silhouetting backlights and strobes and stage colors that ranged from blood red to frosted-over indigo to cold black, blasting all over the majestic Kings Theatre. Deep within the Art Deco palace—one of NYC’s most beautiful venues—lurked the ghost of the Luna Lounge, channeled here by its most-remembered house band, saluting an NYC rock era gone by, but not gone. —Chad Berndtson | @Cberndtson