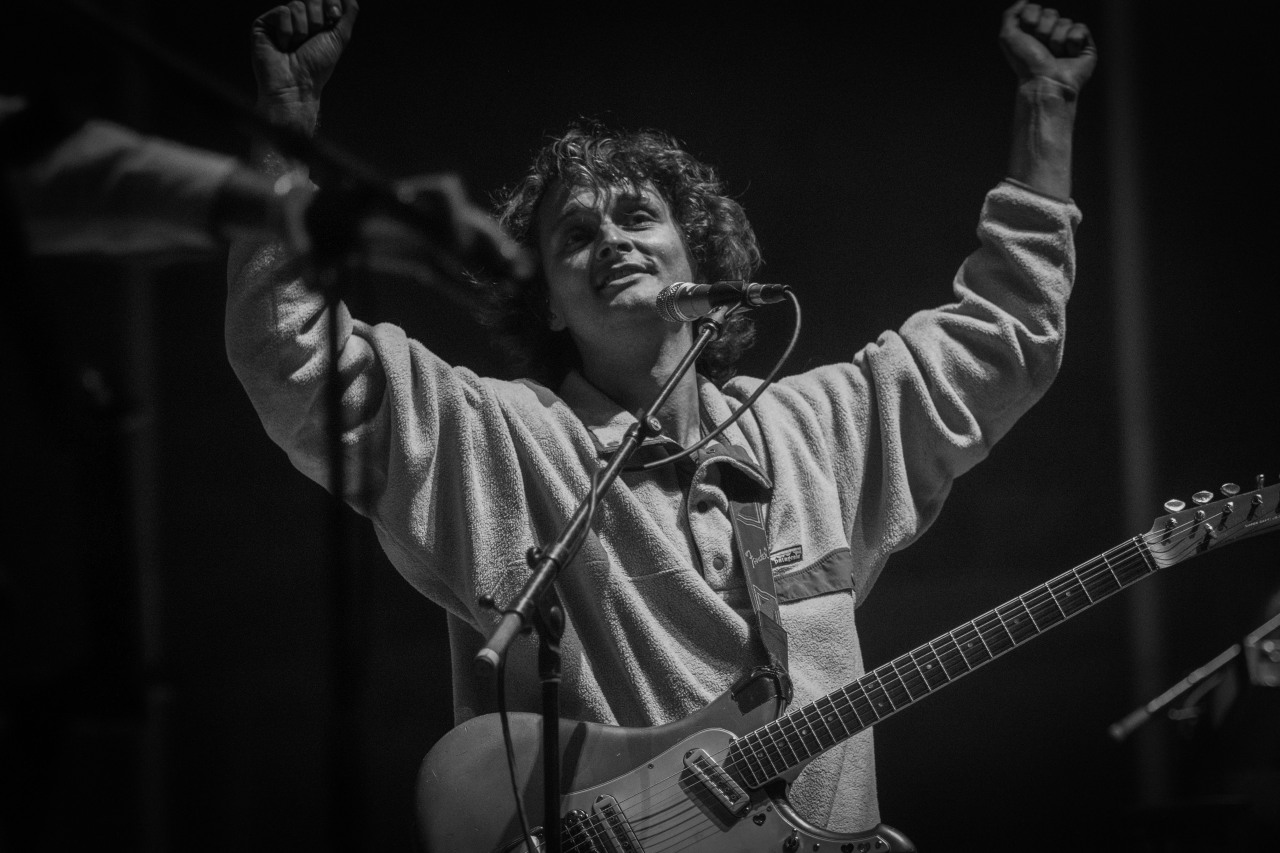 They say that we all perceive time differently at different times in our lives. I wonder what it’s like to perceive time the way the members of King Gizzard & the Lizard Wizard do right now. Where most bands are happy to measure the pace of their release of new music in years, King Gizzard seem to be putting out singles or entire albums at a clip best measured in months, if not weeks or even days. Their sold-out show at Forest Hills Stadium on Friday was an equally perplexing demonstration on the mutability of time, the curfew-limited 90 minutes from start to finish seemingly over too soon for the Lizard Wizard faithful and heretofore uninitiated both, and yet the Australian band packed an apparent infinity of notes and ideas into their limited time onstage. They opened with “The Dripping Tap,” off Omnium Gatherum, one of multiple 2022 releases, the repeated lyric “Drip, drip from the tap, don’t slip on the drip” creating a never-ending hall-of-mirrors effect to match the extended psychedelic meanderings of guitars, drums, harmonica and bass, time fully elasticized, minutes feeling like hours of raucous exploration while the crowd danced along hurried and unhurried all at once.

As the band offered up songs with names like “Magma,” “Lava” and “Hell,” the lights and projected visuals were decidedly red in color. Of course, red can symbolize many things and for the first 30 minutes or so, it felt like it was the flashing red light indicating “anger ahead!” as the band lurched at breakneck speed, a collective driving at full velocity around hairpin turns through the mountains with nary a guardrail in sight, the audience collectively white-knuckled hoping they knew what they were doing. Of course, they did. There’s a cliché about jazz — “It’s about the notes they don’t play” —  but through those first two songs there did not seem to be any notes KGLW didn’t play. Things did relent, though.

“Lava” came with a noodle-y intro that could have been at home in a Grateful Dead jam, “The Garden Goblin” showed off a bit of their goofy side, and “Honey,” off the 2020 release K.G., was awash in microtonal boogie weirdness. The lights returned to red for the end of the show, now the incendiary red of fire, the red-hot, burn-it-all-down combustion of genres and styles as King Gizzard & the Lizard Wizard paired extended versions of “Magenta Mountain” and “Iron Lung” to close out the night. Both tunes flipped multiple times, heading in one direction before expertly rearranging in real time into something completely different. They were either maybe too long or too short depending on your own perception of time but judging from the wild-eyed dancing and fist-pumping from the entire crowd, most likely they were just right. New and old fans alike filed out into the autumn evening, hoping the time until their next KGLW show is at least perceived to be soon. —A. Stein | @Neddyo