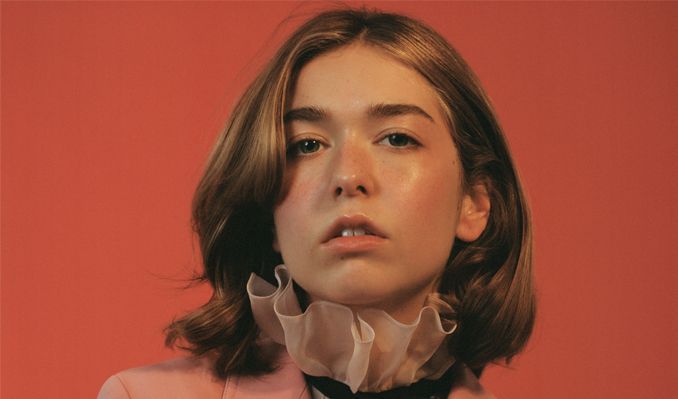 Singer and guitarist Lindsey Jordan, better known by the stage name Snail Mail, burst onto the music scene as a mere teenager and signed to Matador Records the same year she could first vote. With a sophomore album, Valentine—released late last year—under her belt, she was ready to hit the road in support of the new material. Unfortunately, the 22-year-old recent New York resident had to postpone the tour due to surgery on her vocal cords. But Jordan finally kicked off the tour earlier this week and graced the stage of Brooklyn’s Kings Theatre on Thursday night.

Literally suited up in a matching black patterned blazer and flared pants, she quickly commenced with her opening single, “Valentine.” The admirers on the floor were singing along from the jump and became even more enthralled as Jordan, freed from a guitar, danced around while singing, “Feels like spring,” from “Ben Franklin.” She wouldn’t be without a guitar for long, evidenced by her shredding on “Heat Wave,” which elicited more cheers and singing. The recently recovered patient gave a shout-out to her speech therapist, Sarah Brown, who was in attendance, thanking her for the night happening at all.

Although Jordan performed material from both of her studio albums, the oldie “Thinning,” off the very first Snail Mail EP, Habit, made this longtime fan particularly happy. The band exited to leave her solo for an acoustic “Light Blue” as she gently strummed before the sea of happy faces. The set was sealed with a cover of the Smashing Pumpkins’ “Tonight, Tonight” and Jordan shed the blazer before cooing “Forever (Sailing).” Her voice has clearly recovered, so an encore was inevitable: The heart-aching “Mia” paired with a teased “new song” she was nervous to play, which ended up being fan-favorite “Pristine,” capped off the show. —Sharlene Chiu | @Shar0ck