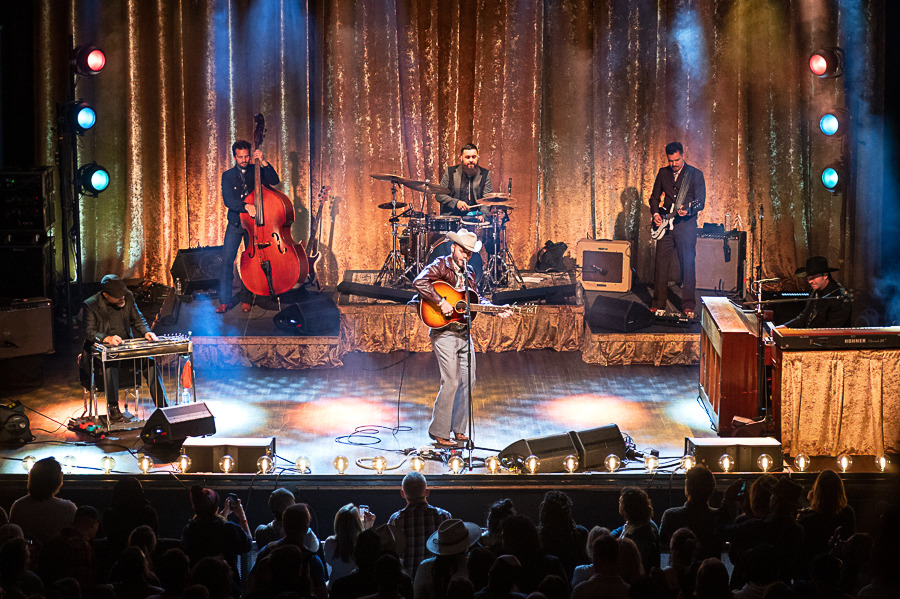 Charley Crockett Basks in the Glow at Webster Hall

Charley Crockett was bathed in gold playing to a very packed house at Webster Hall on Thursday night. With old-school floor lights glowing along the front of the stage, a shimmering plush velvet curtain hanging at the back of the stage and a gauzy yellowed lighting scheme, Crockett and his band were literally basking in a golden glow the entire show. That hue brought a variety of vibes to go along with a set that drew material from Crockett’s full catalog and influences. His band came out in silhouette, teasing the themes to the title track from The Man from Waco, his newest album, before Crockett finally took the stage to raucous cheers and opened with an accordion-laced “Cowboy Candy” followed by “Time of the Cottonwood Trees,” the whole ensemble giving off just-before-sunset golden-hour energy. “Just Like Honey” — the gold of sticky sweetness — followed, Crockett sounding like honey in tea, twangy guitar and pedal steel providing the flavor. His voice effused with the amber gold of a stiff whiskey on “The Man from Waco,” lyrics, voice and country riffs meeting like a three-man pistol standoff, broken by the firing gun of a trumpet.

The set featured few breaks or pauses, one song coming on the heels of another, Crockett hoisting the willing crowd on the back of his horse as he galloped through the golden high plains of Texas. And make no mistake, even though the address was in the East Village, all of Webster Hall was transported to Texas on Thursday night, Crockett crooning about the cities, the towns and the nooks and crannies of his home state. While at times the golden color felt like the sepia photographs of the Old West with Crockett’s straight-from-central-casting sound, he and the band were able to flex their muscles with bits of blues, bluegrass, boogie-woogie, groove, rockabilly and even jazz mixed in — with George Jones and James Hand covers and a T-Bone Walker song filling in the space between his originals.

The audience grew increasingly rowdy as the show went on, letting it all out singing along to “Jamestown Ferry” and wildly cheering for the new album’s lead single, “I’m Just a Clown.” There could be no other closer than “Goin’ Back to Texas,” the set approaching its golden-orange sunset. The encore began with just Crockett and an acoustic guitar, his gilded voice singing the lovely and poignant murder ballad “July Jackson.” The entire band and the opening act, Greyhounds, came back for an all-the-gold-in–Fort Knox, bigger-is-better take on “In the Night” that had everyone moving. Midway through the night Crockett told of the days when he was traveling the country busking street corners for coins and bills, including a stint on the sidewalks and subways of New York City, which must have made the booming chants of “Char-LEY, Char-LEY” as he walked off the stage feel extra special. Pure gold. —A. Stein | @Neddyo