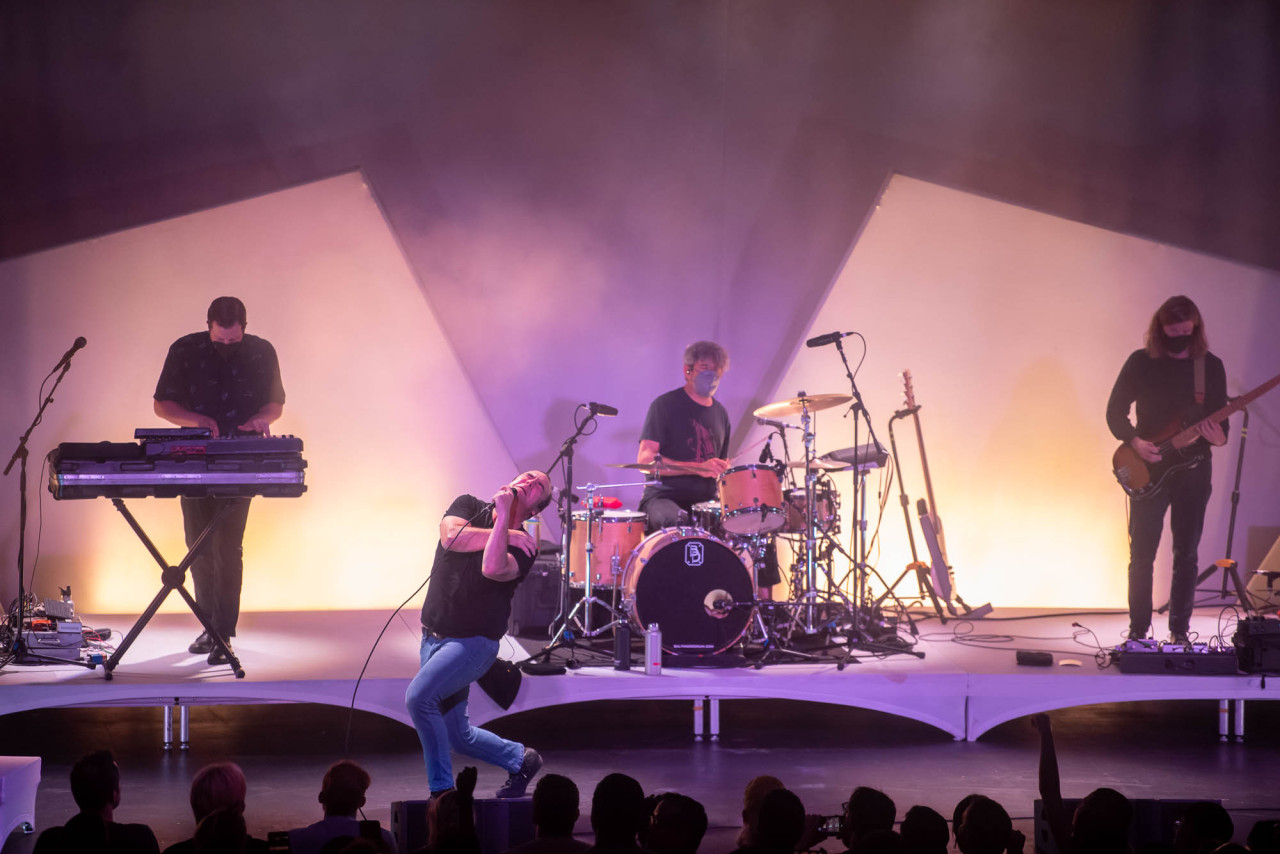 Sam Herring is the definition of leaving it all on the floor. And one can take this literally. By night’s end at Brooklyn Steel on Thursday, the man was sopping wet, sweat cascading down his face, his black T and his jeans onto the stage. If there’s a more committed frontman in synth-pop, let’s see him. Herring is an obvious draw of Future Islands, the Baltimore quartet making art-pop truly popular again. The band — Gerrit Welmers on keys, Michael Lowry on drums, William Cashion on bass — has been making albums about the human condition for more than a decade, but Herring, onstage, inhabits that condition fully.

His is an earnest showman with a rich voice befitting the theatrical stage, punctuated with demonic, metal-like growls. He gesticulates, like he’s in conversation with you. A fan of the finger purse, he likes you to know that when he sings a lyric, he means it. “When I took the time to tell you / You took the time to listen to me too,” he sang on “Plastic Beach” (As Long as You Are, 2020).

As the songs build, like on deep cut “Walking Through That Door” (In Evening Air, 2010), Herring starts to move. He can’t help it. On “Balance,” (On the Water, 2011) the singer high-kicked for a good 10 seconds to Lowry’s crashing drums. But most crowd-pleasing, it seems, is Herring’s sensual stuff, the grade A weirdness of seeing his booty and body work to songs like “King of Sweden,” a new single. If you haven’t seen the band debut it on Colbert, go look up that clip now. Perfection.

It’s clear, too, why ESG, the legendary 1980s South Bronx funk-rock group, were such a smart and exciting opener for Future Islands. Originally, they were the Scroggins Sisters, but last night, Renee Scroggins took the stage with her kids Nicole (bass) and Nicholas (percussion, dance, random alien mask). The line is clear from Scroggins’ yelps and hoots, the invitation to move, and the coursing bass and drum lines to Future Islands’ music and style. —Rachel Brody | @RachelCBrody