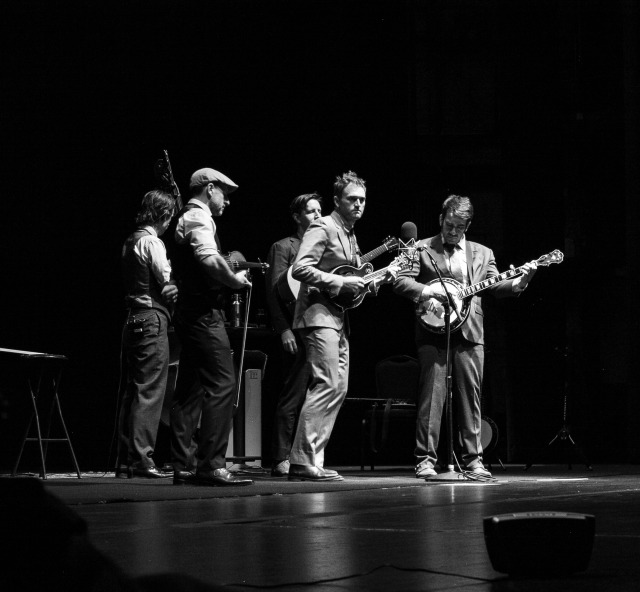 “Don’t judge a book by its cover” is a well-worn idiom we’ve all been told—there’s more than meets the eye. With the Punch Brothers, that’s certainly the case. To look at the quintet in front of a packed house at the Beacon Theatre on Wednesday night was to see a classic string band: mandolin, banjo, guitar, fiddle and upright bass all huddled around a single microphone in the center of the stage. And in fact, the first half of their set leaned heavily on classic material taken from their latest album, Hell on Church Street. That album is a reimagining of the late Tony Rice’s Church Street Blues album, which is itself a progressive take on bluegrass traditionals. So yes, the no-relation Brothers—Chris Thile on mandolin, Noam Pikelny on banjo, Chris Eldridge on guitar, Gabe Witcher on fiddle, and Paul Kowert on bass—were wearing the “cover” of a traditional bluegrass band. But by the time these songs got to the stage Wednesday night, the story they told went well beyond the picture on the cover.

The second half of the show was a masterful weaving of musical storylines and genre-defying compositions. “The Blind Leaving the Blind” was a full-on song suite, Thile leading the group through a downright Mozartian set of sections, dizzying complexities matched by the skill of the musicians. The instrumental “Jungle Bird” felt equally byzantine with little symphonic pieces interacting with one another, mind-enhancing solos on banjo, fiddle, guitar and mandolin that went beyond categorization but maintained a groove, nonetheless. “It’s All Part of the Plan” was more terrestrial, an indie-rock vibe with a prog-rock-on-strings twist, Thile’s vocals going mandolin staccato then violin drawn-out, Pikelny providing one of many impressive banjo solos midway through.

The set had a controlled inertia as songs bled from one into the next, the band orbiting around the single microphone, creating and then manipulating the dynamics of volume and tempo as a single unit. The closing pair of “The Wreck of the Edmund Fitzgerald,” one of the covers-of-a-cover-of-a-cover tracks from the album, and “Rye Whiskey,” a crowd-favorite Punch Brothers original, was an exercise in dynamics to the extreme, everyone in the audience on their feet, hooting along with the band by the end. The encore opened an instrumental hootenanny, “Watch ’at Breakdown,” Pikelny again combining progressive notions to the traditional banjo solo, Thile playing just one more of countless wow! mandolin solos throughout the night, and Eldridge saving his best for last, not quite channeling Tony Rice, but infused with his beyond-Americana spirit. The performance ended with “Julep,” the Punch Brothers at their best—singing about booze, all five instruments in a complicated, beautiful dance together, the whole concept of genre reduced to nothing, a book without a cover altogether. —A. Stein | @Neddyo