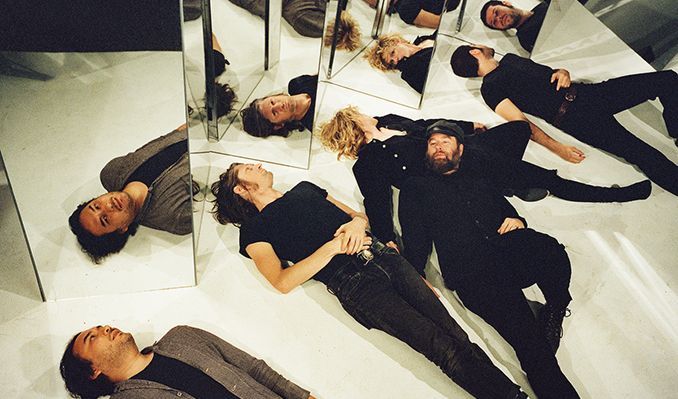 The Black Angels bring the psychedelic scorch — scratchy, fuzzy, galvanizing, pealing music that, as of the band’s most recent album, 2022’s mesmerizing Wilderness of Mirrors, can still plunge you into pie-eyed hypnosis while creating enough tuneful racket to strip paint from the walls. Like drone? Like reverb? Like jangle? Step right up — or rather, right in, because the tastefully terrifying little world the Black Angels’ music inhabits is more like something you visit for a spell and then emerge from, properly rocked and definitely rolled, in the dirge-y, 13th Floor Elevators sense of the terms.

At Brooklyn Steel on Monday, headlining a previously postponed show, the five-piece served up thick portions of Mirrors, whose songs constituted nearly half the set. It’s a strong record, chewing on the band’s usual mutant–Velvet Underground and stoner rock-isms, this time also with a big chomp of Barrett-era Pink Floyd. The music is typically dire, and it skirts the edge of annihilation but doesn’t go over that edge, revealing a surprising amount of heart and even pathos for something that might otherwise be cold, metallic and abandoning.

“Without a Trace” kicked off things — starting slyly calm before big crashes of drums and washes of bass and effects seized the room. “El Jardin,” live as on record, served up quiet-loud contrasts, building behind insistent but at-first benign beats that then thrust everything to the front at once: explosive rhythms and singer-bassist Alex Maas’s bleary-howling vocals, fit for fist-pumping. And that’s how it went for the whole 90 minutes, with a lot of maneuvering within this established framework of heavy effects and drone and echoey intensity, from the cracked-edge Kinksian pop of “Firefly,” to the topical terrors of “Empires Falling” and the haunted “Vermillion Eyes.”

Their catalog goes back almost 20 years at this point, and old favorites like “Young Men Dead,” “Bad Vibrations” (a rarity this tour) and “The Sniper at the Gates of Heaven” all arrived from the band’s earlier era, setting up an encore finale of “Bloodhound on My Trail,” the always-thrilling acid-blues ramble that sounds a little like the Velvets mining Robert Johnson — doom-dealing at some kind of crossroads. —Chad Berndtson | @Cberndtson