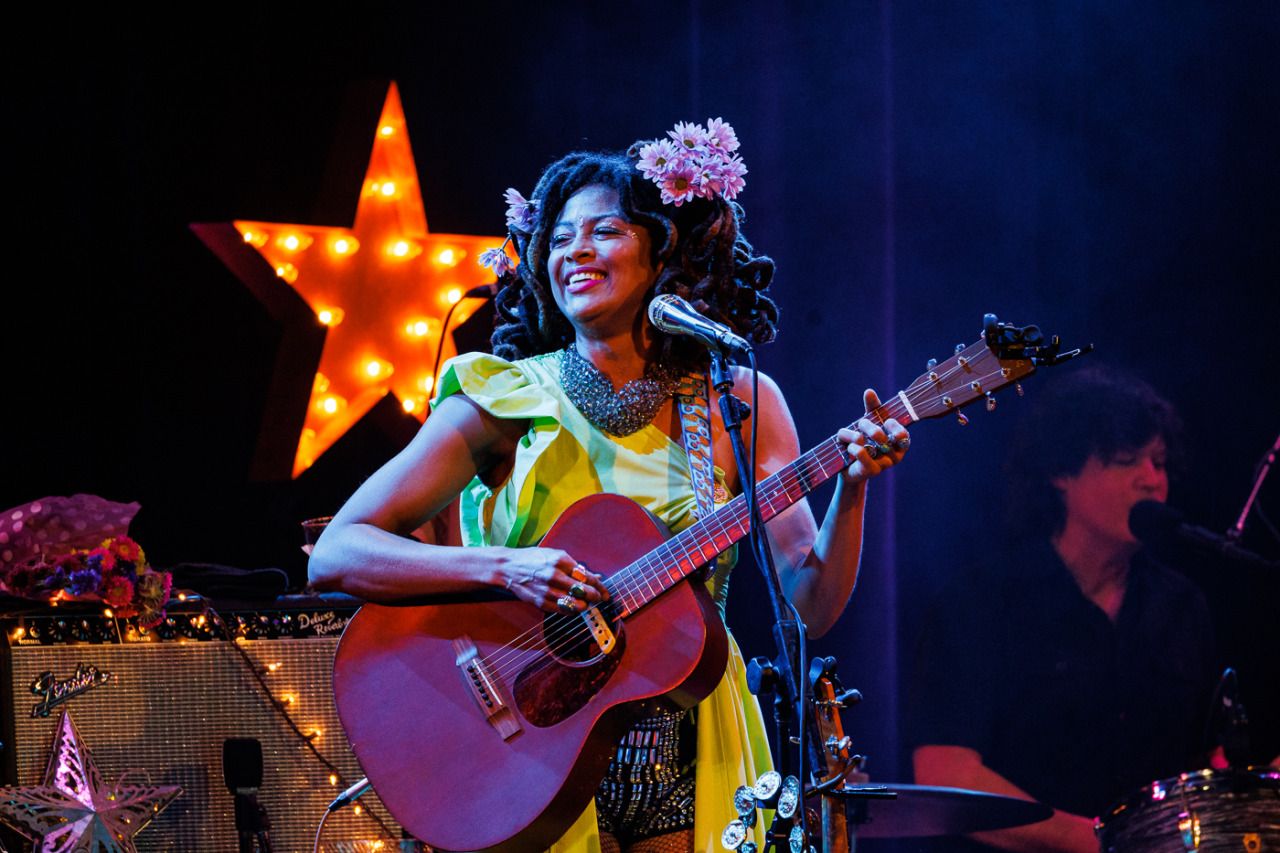 At one point midway through her set at the Town Hall on Wednesday, Valerie June gave praise to the “magic of the moon and the stars.” It was an explicit nod to the theme of the night, but it barely needed mentioning from a stage literally covered with stars and moons, as well as flowers (which she referred to as the “stars of the earth”) and a performer who seemed to sing with her feet planted in the ground and her head in the stars. With a massive backing band behind her, including a horn section, multiple guitars and at several instances the full Resistance Revival Chorus, June appeared in fluorescent green as some sort of life-size flower, a star of the earth both literally and mythically. June opened singing about being “sad and lonesome,” but with a 20-piece ensemble backing her and a crowd feeling the pulse of the drums and her voice reaching all corners of the hall, she seemed anything but. “You and I,” a song about friendships and kismet, felt more appropriate, the music finding a middle ground between an extravagant folk and a stripped-down rock and roll. “Joy! Joy! Joy!” she exclaimed for emphasis as the choir left the stage.

Between songs June’s voice continued to fill the room, part storyteller, part shaman, part preacher, part life coach. Within the songs, Dan Iead featured prominently, his pedal steel a perfect fit for the roots-of-the-earth Americana meets ethereal up-in-the-clouds dreamscape of the music. Songs floated one to the other with short interludes from the band, adding to the heavenly quality. June moved and danced and strutted across the stage effortlessly, adding a shimmering shawl to her ensemble, adding to the dreamlike feel.

The set flowed with positive energy with selections from across her full catalog, like “Two Roads” and “Smile,” gospel, folk, rock and soul mixing into something unique and magical in June’s singular voice. During a short solo section, she treated the audience to an otherworldly version of “What a Wonderful World,” sounding like something that had dropped down from the stars. “Astral Plane” described the scene, June singing about “Dancing on the astral plane” and “Floating on the stratosphere,” taking the audience on her voyage. The latter part of the set featured more terrestrial rocking-out with three guitars, big horn swells and some impressive high kicks from June for emphasis. The Resistance Revival Chorus returned for the final song of the night, “Home Inside,” June singing about a “Garden to grow” inside her, stars in the sky, stars of the earth and at least one self-proclaimed “rock star” onstage. —A. Stein | @Neddyo