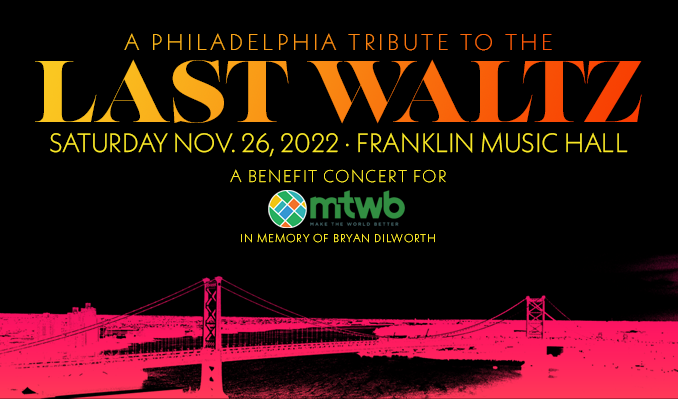 A Philadelphia Tribute to The Last Waltz, a Benefit for Make The World Better Foundation

You’re invited to join in on what’s becoming a Philly music community Thanksgiving tradition: A Philadelphia Tribute to The Last Waltz, in which some of Philly’s finest rock ‘n’ roll musicians get together to pay tribute to The Band’s legendary 1976 concert and film of the same name. Now in its third iteration — after sellout shows at The Trocadero and Underground Arts — the show will take place this year at Franklin Music Hall on the Saturday night after Thanksgiving, November 26, 2022.

This year’s concert is special in two ways: One is that it’s a benefit for Make The World Better Foundation, the nonprofit organization founded by Connor Barwin. MTWB connects people and inspires stewardship through public space revitalization projects. A limited number of $100 Meet & Greet tickets will include early access to Franklin Music Hall, catered items from some of Philly's best restaurants, an open bar, and a chance to hang with some of the night's musicians.

"This year's show is a tribute, a celebration, and a benefit, all in one," noted the night's music director, Andrew Lipke.

So far, this year’s lineup for the The Last Waltz Philadelphia includes:

...with more special guests to be announced